This enterprise company wanted for years to implement a vision of the ‘Workplace of the Future.’ In our “Coffee With the Experts” interview series, Karen McClellan shares how, in the tumult of 2020, Colliers helped them take the leap. 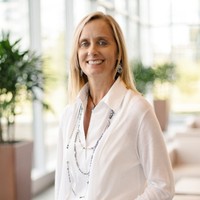 The biggest companies can be the slowest to change, but this past year has been one of revolutionary transformation for Schneider Electric.

Following the onset of the COVID-19 pandemic, the Fortune 500 company has shed or downsized more than 40 office properties, reducing their brick-and-mortar footprint by hundreds of thousands of square feet. But the reduction of physical spaces isn’t a sign of something ominous: Rather, Head of Real Estate Karen McClellan shared, the shift represents an exciting leap forward in the company’s “Workplace of the Future” — a vision that has been gradually unfurling since 2018.

This future workplace was first showcased with the launch of the company’s Nashville office three years ago, then with their Boston office — flexible, modern spaces with open floor plans. But, implementation lagged. Now, with the help of leading brokerage Colliers, Schneider Electric is implementing Upflex’s hybrid hub-and-spoke workplace model, and all the flexibility, mobility and efficiency they had long envisioned. As of now, the company has acquired nine hubs through Upflex’s global network of more than 5,000 commercial spaces, beginning with their New Jersey offices and expanding to a number of other states.

McClellan oversees an eight-person team and some 250 properties for the Fortune 500 company in North America alone, managing an annual $80 million spend on leases, but she took some time out to catch up with Upflex (virtually) out of her home office in Cincinnati, to talk gradual evolution, the “drastic, drastic change” of the past 12 months, and this jolt forward in the company’s realization of a new kind of workspace, and a new culture of work.

Upflex: Schneider Electric is known for manufacturing, but you’ve been evolving into more of a software company. How has this evolution manifested over the past few years when it comes to workspace?

Karen McClellan: We’ve been transitioning into what we call the ‘Workplace of the Future.’ In 2018, we opened a new site in Nashville, and that was our first big high-rise office. ‘Workplace of the Future’ means, in part, that you don’t have an assigned seat. Now, it doesn’t sound so revolutionary, but for Schneider — a very old company which is very slow to change — it was a big deal. If you can compare that to 1980s mauve-colored workstations with high cubicle panels and dark cave-like surroundings, that’s what we came from. So, it’s just quite a refreshing change.

But, you’ve got to recognize, no longer do you have your domain of your own — your workstation — and no longer is it a status thing to have an office. That is a big cultural shift. When we introduced it, it was showcasing our products. We have a lot of products that make our buildings efficient, so showcasing our products, being more efficient with our real estate, and in changing the culture. Our executives led by example in our Nashville site. They were at a workstation out in the middle of the space, with their teams.

Upflex: What inspired this untethered office layout as ‘futuristic’?

Karen McClellan: : For example, I have two young daughters who are entering the workforce, and an office doesn’t mean anything to them. The technology and the flexibility means more to them. We’re trying to adapt and adjust to that. We have a lot of the aging workforce, but we’re also trying to attract new talent, and it’s been successful. Our Nashville office was really quite something, and then we opened up the Boston office with a very similar look and feel, and again, no assigned seats. We were in the middle of that transition, adjusting to that change — which was a big cultural shift for our company — and then COVID happened. It’s going to be a whole new world after COVID for sure.

Upflex: What are some of the benefits you’ve seen come from this new model?

Karen McClellan: : Nashville’s our biggest example —  our greatest number of employees in one office that’s not a manufacturing site, about 1,000 employees — and it’s just been huge. I think our recruiting is better. I think our productivity is better. There are people that have just said, ‘I feel better,’ from a wellness perspective. That’s a big thing too: I’m a big proponent of access to natural light, and we had a lot of dark offices. Yes, you’ve got your own office, but you’re in the middle of the building and you don’t see daylight all day. So, from a wellness perspective, I think it’s been huge, too. We’ve really seen a lot of positive impacts. That’s another really positive thing about Schneider: They’re very invested in the wellness aspect for their employees. Granted, this saves them money, but at the same time it does feel like they’re thinking about employee wellness, and it’s and it’s been huge.

We just haven’t been able to make the shift all over the country, but I just would always say, ‘Go to Nashville, go to our office, spend a little bit of time there, and you feel like it’s a whole new company.

Upflex: You mentioned a whole new world after COVID — Has the pandemic had a big impact on this shift toward Schneider Electric’s future workplace?

Karen McClellan: : It has, very much so. This pandemic has been a crisis, but I remember our North American president quoted Winston Churchill: “Never let a good crisis go to waste.” Our CFO said we have all this real estate that’s not being used. And now, we’re all working from home, and we’re all being pretty productive. Why are we paying for all of this real estate? They formed what they called a tiger team, looked at literally every single commercial property that we have, and challenged every single commercial property, saying: Why do we need it? If we don’t need it, shut it down. We shut down 46 properties, I think, in 2020, And we’re scheduled to do quite a few more in 2021, deliver quite a bit of the same energy.

Upflex: How is that shift affecting the way you’re looking at and using space?

Karen McClellan: : It’s going to be a hybrid model if and when we ever come back to the office. We’re a very flexible company. Not everybody’s in the office all day every day. So, before [the COVID-19 pandemic], if we had 100 employees, I would have needed about 60 seats. Now, I’m saying I only need 40 seats. That’s for my larger offices.

While this is happening, for the people who are newly working from home, there has been great support: While we’re reducing these big office spaces, the company helps people build up their home offices. That’s where my adjustable-height desk, my new chair, my new monitor arm came from. It’s a work-from-home package offered to everyone. All they have to do is ask.

With my small offices, that’s where Upflex comes in: We have salespeople all across the country. We had over 100 small offices, and we just said, that’s a lot of leases and paperwork and landlords and operating expenses — it’s just it’s just a lot of activity. And if you could see our offices, they were outdated — outdated furniture, high cube walls. There was also a security aspect to these outdated offices. We realized, this just doesn’t make sense at all: Let’s go for a class A space on a shorter-term lease that is very flexible. Colliers is our partner, and they brought us this Upflex model and we were like, ‘This is it.’

We’re still testing this new model out, but it really made sense for us to have one point of contact and a flexible source for the smaller offices and the smaller teams.

Upflex: What do you see in the coming year or two?

Karen McClellan: We’re heavy on engineers, and they prefer to be in the office. They like to touch, feel and have their things in front of them. So, I would say we still have quite a few people that are going to want to come back in, but I think most everybody has been fairly productive working from home. So, we’ll have a hybrid model: We’ll have offices for our regions with over 50 employees, but I don’t think we’ll have everybody in the office at one time. And, if it’s a region with fewer than 50 employees, it’s either an Upflex hub, or it’s just on-demand passes. That’s how we’re trying to model everything going forward right now.

Upflex: Tell me about your office right now.

Karen McClellan: I started at one of our manufacturing plants. When I took this job 17 or 18 years ago, I also traveled a lot. I had my laptop and I was ready to work anywhere. But an office is important. I’m in Cincinnati, and I have the best setup in my home office now. Who can work with less than one screen? I have three screens going on. I can be watching the news if I need to, I can close my doors for privacy, and usually about three o’clock in the afternoon I’ll put my adjustable height workstation up and I’ll stand up for a while. And it’s full of natural light — I can watch the construction activities in the cul de sac — it’s wonderful.