In 2022, Europe’s coworking market will continue to experience rapid growth. Upflex is growing right along with it.

Around the world, flex space has been on the rise. The workplace changes wrought by the pandemic mean that now, even conservative markets like India are going all in on flex. Europe has always been a key market in the international flex space industry, but now, the region is edging ahead of nearly every other.

As France, the Netherlands, Germany and other European countries each experience their own flex-space reliant workspace revolutions, we’ve kept a close eye on the change. And we’ve seen, at the head of the pack, is the UK. 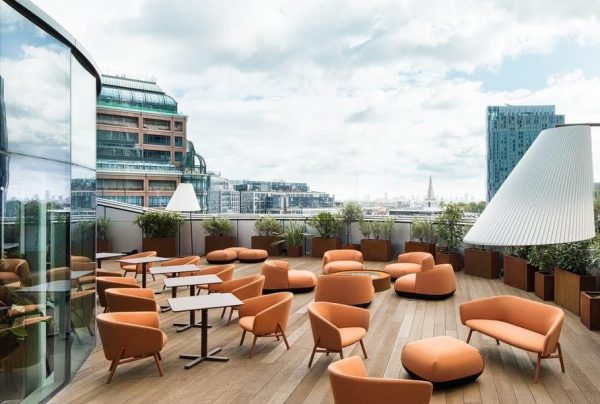 Uncommon coworking space on Liverpool Street in London. Find this space and more at explore.upflex.com.

Here’s why I’m so interested: At Upflex, the most valuable benefit we can offer to a company — from a few-employee start-up to a thousands-strong global Fortune 500 — is the dream of a single, centralized touchpoint for every single piece of office real estate a company utilizes, of any size, anywhere in the world.

All of these workspaces — from Des Moines to Delhi, Moscow to Milan to Melbourne – fall under one master service agreement. They’re all paid for in one monthly invoice. And employees can seamlessly book space on demand in any of them using one convenient app. This is the next generation of hybrid. It’s hybrid work that works.

In order to provide this seamless experience to even the largest companies, with the most geographically distributed teams, we know that truly global coverage is a must. Great workspace options for every employee, everywhere means that no one gets left out — or left behind.

In order to help our global enterprise users implement these seamless, efficient flex strategies for every employee — in beautiful workspaces, no less — we’ve been developing our global coverage, focusing network growth on key territories, including India and Europe. And in the latter region, our biggest focus has been on the UK.

Before the pandemic, London was far and away Europe’s most mature flex office market. According to research from Savills, in 2019, London proper was home to almost a quarter of the continent’s total office demand, and London’s West End hosted 17% of demand — still nearly twice the European average of 9% of total international demand.

Right now, central London has the highest concentration of flex space globally, at around 6.9% of total office stock, ahead of other mature flex markets including New York City (4.3%), San Francisco (4.7%) and Paris (3.5%), according to JLL. Even as occupancy took a hit early in the pandemic, the bounce-back is still raising eyebrows.

Part of this growth is rooted in history. Long leases and expensive rents have pushed many European cities—from Stockholm to Dublin—toward flex, but especially in London, centuries-old commercial real estate norms mean, for some tenants, very long leases — as long as 20 years. These have imposed significant constraints upon tenants, and when flex hit the scene, offering shorter-term, flexible options for attractive, amenity-rich workspaces as an alternative to these burdensome leases, it was bound to explode.

Outside London, coworking is sweeping small cities and suburbs. IWG reports that Birmingham, Manchester, and similarly sized bergs are some of their fastest-growing markets, and that 60% of their 350 UK locations are in suburban areas or small towns. 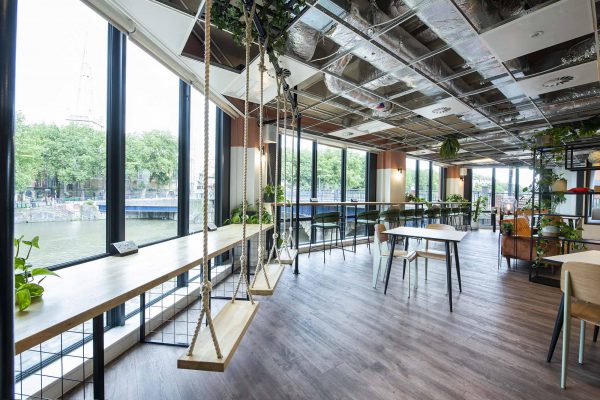 Runway East in Bristol. Find this space and more at explore.upflex.com.

Watching all this growth, and seeing every indication that it will continue on this trajectory, Upflex has been bullish on our presence in the EU and UK. We’ve been hiring staff across Europe, and heading into 2022, we now have boots on the ground in London, Paris, Lisbon, Berlin and Warsaw. We’re continuing to recruit across Europe, augmenting local capital with local expertise. We also made a recent acquisition: UK flex space aggregator WorkClub. In bringing WorkClub under the Upflex umbrella, we now have dedicated staff at Upflex’s London headquarters, not to mention 400 new locations on Upflex’s network across the country, from Bath to Brighton, and London to Liverpool.

All signs point to the flex office continuing to have a bigger and bigger footprint in the office market over the coming decade. By 2030, JLL predicts that nearly a third of all office space will be flexible in some form. At Upflex, to keep offering the world’s largest and strongest network of workspace on demand, we’re planning to be right in step with that growth.

Coworking WorkClub
The Story Behind Upflex’s 400+ New Coworking Space Partners in the UK2022-01-212022-01-20https://upflex.com/wp-content/uploads/2018/04/logo_upflex.svgUPFLEXhttps://upflex.com/wp-content/uploads/2022/01/eu-uk-coworking-market.jpg200px200px
About
Christophe Garnier
Christophe Garnier is the CEO & Co-Founder of Upflex. He is a serial tech entrepreneur and fascinated by the current changes in work. In his spare time, he loves surfing.
More from the blog
Recent Posts
Company News
Featured Spaces